Melinda Gates was represented by Robert Stephan Cohen in her multibillion dollar dispute with Bill Gates.

Keeping up with Kanye West and his extensive roster of divorce lawyers is undoubtedly challenging. Kanye West has reportedly retained Robert Stephan Cohen, the same attorney who defended Melinda Gates in her multi-billion dollar divorce from her ex-husband Bill Gates, according to TMZ. For the uninitiated, Kim Kardashian divorced her Grammy Award-winning ex-husband, 45, on February 19, 2021.

In the midst of his argument with Kim Kardashian, sources with direct knowledge told TMZ that Ye had hired Robert Stephan Cohen of Cohen Clair Lans Greifer Thorpe & Rottenstreich LLP as his sixth divorce lawyer. Cohen is headquartered in New York, but the West-Kardashian divorce procedures are taking place in Los Angeles. As a result, Nicholas A. Salick of Salick Family Law Group, APLC has been hired by Kanye West to serve as his attorney in California. Notably, in addition to Melinda Gates, celebrities who have worked with Robert Stephan Cohen include Rupert Murdoch, Chris Rock, Athina Onassis, and others.

Kim Kardashian was officially proclaimed single in March 2022, but she and Kanye West have yet to agree on a property settlement and parenting arrangement for their four children, North, 9, Saint, 6, Chicago, 4, and Psalm, 3. The former power couple already has a prenup in place, so dividing up their different homes shouldn’t be a problem. Regarding child custody, West revealed on the Alo Mind podcast that Kardashian has the children “80% of the time” and is mostly responsible for raising them. Kardashian is a 41-year-old reality star and entrepreneur.

While trying to maintain a generally unified front and getting back together occasionally for their children’s events, Kanye West and Kim Kardashian’s divorce hasn’t exactly been a bed of roses. But Ye also frequently vents on social media about his ex-wife, specifically picking on Pete Davidson, who was Kim’s ex-boyfriend. 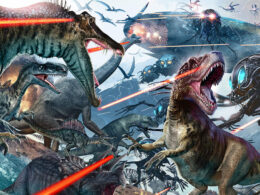 ‘Men in Black’ director Barry Sonnenfeld’s ‘Dinosaurs vs. Aliens’ has been stalled in Hollywood for a decade. NFT…
byCelebrity Desk Kyle Soller and Denise Gough talk about being a part of the “awesome” Star Wars programme in an Andor Exclusive.

Kyle Soller and Denise Gough, stars of the movie Andor, talked about joining the Star Wars universe and…
byCelebrity Desk