At the late Queen’s funeral procession, estranged brothers Prince William and Prince Harry once again support one another.

The brothers got back together a second time. Prince William and Prince Harry are once again by each other’s sides as the late Queen’s coffin is brought to Windsor Castle, where she will be buried alongside her late husband Prince Philip, after accompanying each other in her procession to Westminster Hall a few days earlier.

The brothers joined forces as they made their way to Westminster Abbey for the Queen’s burial procession behind her casket. The brothers were strolling side by side at the sombre parade where it was obvious that all mourners were on the verge of tears, despite the fact that they had yet to engage with one other at these public ceremonies. Other royals who had witnessed the Queen’s final moments were present alongside the royal brothers, including Prince Andrew, Prince Edward, and the newly-elected King Charles III.

Prince William was accompanied by his eldest son Prince George, while Princess Anne’s son Peter Phillips was standing next to Prince Harry. The family’s female members, who rode in cars at the rear, joined the parade as well. However, Prince Harry and Meghan Markle’s sitting placement later at the funeral service raised some sharp eyebrows because they were situated far apart from Prince William and his family in the front row. Along with their cousins Princesses Beatrice and Eugenie and their respective husbands Edoardo Mapelli Mozzi and Jack Brooksbank, Harry and Meghan were crammed into the side of the second row. Even though their ranks may have just caused this arrangement, royalists nevertheless noticed the small aspects of the circumstance.

Kyle Soller and Denise Gough talk about being a part of the "awesome" Star Wars programme in an Andor Exclusive. 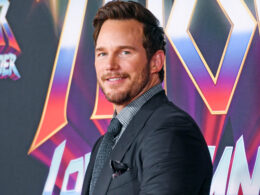 “Religion has been oppressive as f*** for a long time,” Pratt says, and denies ever attending Hillsong Church.…
byCelebrity Desk