On Wednesday, after a wild night at the 80th annual Golden Globe Awards, the majority of Hollywood was still recovering from a hangover, but Angelina Jolie was in New York City. Instead, the actress was seen out shopping with her 18-year-old daughter, Zahara Pitt-Jolie.

The two are captured by paparazzi in casual outfits as they enjoy their day together. Zahara chose to dress in a black coat, Converse sneakers, black jeans, and a navy blue shirt. Jolie, meanwhile, looked stylish in a black merino wool coat from Another Tomorrow, wide-leg, light-wash denim, and black boots. She added aviator sunglasses and a leather Saint Laurent bag to complete the look.
For supper at Eleven Madison Park the previous evening, the actress wore a black dress, a black coat, and leather boots. At the Globes, her ex-husband Brad Pitt was competing against Ke Huy Quan for the title of Best Actor in a Supporting Role. Despite this, Pitt received numerous compliments from winners and presenters throughout the course of the evening, including Quinta Brunson, Regina Hall, and other celebrities praising him live on stage. Jolie chose not to attend the presentation because she is not up for any awards this year, preventing what may have been an unpleasant reunion.

Just one week after being spotted in London enjoying coffee with actor Paul Mescal, the actress was spotted touring New York City. The two met up and there have been dating rumours, but neither has acknowledged anything. Given that Shiloh, Jolie’s other kid, was also there, it was more likely that they were simply getting together as friends. The actual query is: Who did Jolie have dinner with at EMP? Because if we’re trying to figure out if the actress is presently dating anyone, it may very well be the response.

Britney Spears' New Tattoo in Maui "Really Sucks," She Says: I must "Fix It" Another day, another business endeavour from Snoop Dogg. Snoop Loopz cereal is the latest breakfast offering from the…
byCelebrity Desk 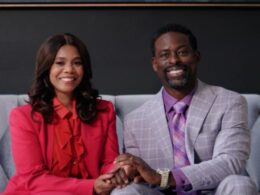