After his passing, Chadwick Boseman received an Emmy for his work in Marvel’s What If? The 2022 Creative Arts Emmy Awards event was held on Saturday, September 3, at the Microsoft Theater in Los Angeles. The late actor won the prize in the Outstanding Character Voice-Over category, and to accept the honour, his wife Simone was there.

The late actor’s wife delivered an emotional acceptance speech and also accepted the honour. According to the woman’s statement to Deadline, “When I learned Chad was nominated, I started thinking of everything that was going on in the world and our world and being so in awe of his commitment and dedication. What a beautiful moment that one of the last things he would work on was something so important to him and to the world but also something new.

“Chad would be extremely honoured, and I am honoured on his behalf,” she continued. The actor was given the honour posthumously for providing the voice of T’Challa in Marvel’s animated series, which served as his final appearance before his passing in 2020.

T’Challa was voiced by Chadwick Boseman in four episodes of What If…? Black Panther marked the beginning of the actor’s Marvel career, and he swiftly rose to fame as one of the most adored superheroes. Boseman was among the first actors to formally agree to reprise his MCU role in the animated series, according to director of What If…? Bryan Andrews. On August 11, 2021, the first season of What If…? debuted. Up till October 6, there were nine episodes of the show. 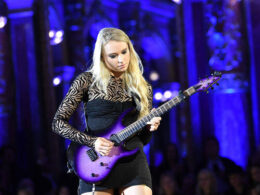