At the GLAAD Media Awards, Survivor finalist Zeke Smith pops the question to his partner Nico Santos live on stage.

The GLAAD Media Awards recognise various media outlets for their exceptional LGBTQ portrayal.
The theme of the 33rd GLAAD Media Awards on April 2 was love. A romantic moment occurred when Survivor participant Zeke Smith proposed to his longtime love, Superstore actor Nico Santos, on stage while addressing to the crowd and the audience. Smith got down on one knee and made a heartfelt speech before the proposal.

According to ET Canada, Smith began his address by telling the crowd how Santos knocked him for a loop and then followed by expressing his admiration and thanks for Santos. “I learned how to love from you, Nico. I want to spend the rest of my life with you since you are my other half “He lowered himself to one knee gradually. Santos, who was somewhat taken aback, swiftly replied “yes” before putting the ring on his finger. After his now-fiance made the significant gesture, Santos appeared overtaken with emotion and appeared to cry. Standing ovations were given to the pair as the audience applauded their touching union.
Click HERE to view the beautiful moment.

For the couple, it was a full circle event because they originally connected at the GLAAD Media Awards in 2018 and began dating shortly after. In a recent interview, Santos professed his support for Zeke Smith, who has received praise for becoming the first transgender contestant in the history of Survivor.

Later, as Zeke recounted, both joined Instagram to celebrate their engagement on their individual profiles “Yes, he replied. Santos only admitted, “I said yes,” while declaring, “I’m the luckiest person in the world. You will always be in my heart.” 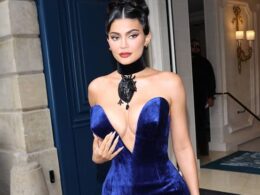 Kylie viewed the TikTok comments on a fan’s video and wasn’t impressed.Due to the latest ad issue, Kim…
byCelebrity Desk