Kanye West caused a stir by donning a “White Lives Matter” t-shirt during Paris Fashion Week. Find out more about the rapper’s criticism inside.

At Paris Fashion Week, rapper Kanye West caused a stir by donning a “White Lives Matter” t-shirt. Several people, including fashion editor and stylist Gabriella Karefa-Johnson, who was in attendance, criticised the rapper for wearing the t-shirt to his brand’s Fashion Week presentation.

Gabriella Karefa-Johnson voiced her concerns about Kanye West wearing “White Lives Matter” clothing in the show on social media, and the rapper responded by attacking Karefa-Johnson online in a series of since-deleted remarks. Several models and members of the fashion industry, including Vogue magazine, criticised Kanye for his social media statements in favour of Karefa-Johnson.

Kanye West is described as a bully by Gigi Hadid.
One of the first famous people to criticise Kanye for his posts criticising Karefa-Johnson for her opinions on his controversial clothing was Gigi Hadid. Hadid posted a story on Instagram. As the model defended Gabriella, she lambasted West, calling him a “bully.” Hadid penned, “As if declining to express a viewpoint should be prevented by the “honour” of being invited to your programme? Lol. You are an idiot and a bully.”

How Hailey Bieber felt
Hailey Bieber, another model, also expressed her support for Karefa-Johnson. She did not specifically mention Kanye in her message, choosing instead to express her love for the fashion critic who had received harsh criticism from West. “My respect for you runs deep, my friend,” Bieber wrote in her words of encouragement for Gabriella.

Jodie Turner-Smith calls Kanye a “fake”
Kanye West’s “White Lives Matter” t-shirt earned him the insults “fake” and “disgusting” from Jodie Turner-Smith. The 36-year-old model posted a screenshot of a post from Kanye West’s Instagram account that said, “WHEN I SAID WAR I MEANT WAR,” and criticised the rapper for his statement, stating he was attempting to “bring people together” while he posed wearing the divisive t-shirt. “Fake and ugly and awful,” Turner-Smith said over the phone to West.

Later, Kanye West also used his Instagram account to refer to Gabriella as his “sister,” saying that the two had met after the issue and had “apologised” to one another. Despite their differences, the rapper said that at least they both adore “Ferdie and Fashion.” 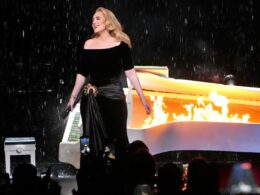